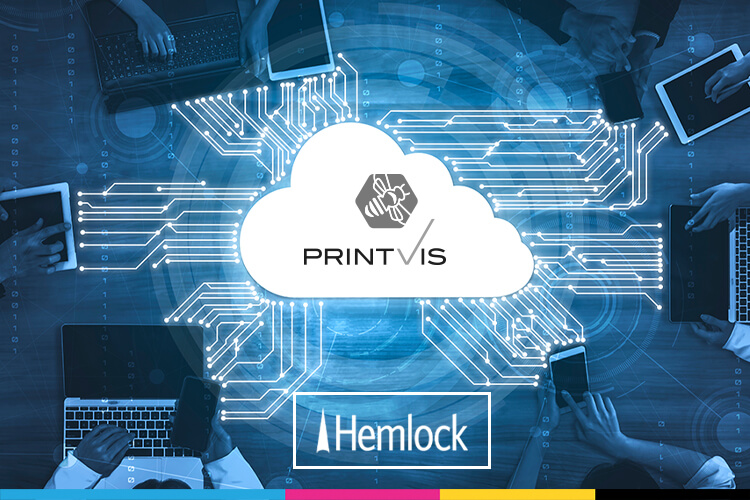 Founded in 1968, Hemlock is one of the largest and most recognized printing companies in North America. Hemlock specializes in digital and offset commercial printing, with 5 offices and 200+ employees.

In 2017, Hemlock had started experiencing the pains of outgrowing their legacy MIS solution that was purchased back in the 90s. After months of evaluation, they chose to implement PrintVis and brought in Tim Kalyuzhnyy as the Implementation Lead and ERP Administrator to manage the project.

To help explain some of the reasons why a large print company like Hemlock selected PrintVis as their core MIS/ERP system, we conducted an interview with Tim himself. He has been working with Hemlock and PrintVis since 2017 and had a lot of insight to share on planning, implementation, and training.

The following is an interview with Tim about his experience working on the PrintVis implementation at Hemlock Printers:

Hemlock had been having growth problems with their existing MIS, EFI PSI. It didn’t do what they needed it to do, so they were forced to build additional functionality on top of it. Over time these customizations were causing a lot of issues in terms of productivity and performance. They didn’t have the full visibility and control they required over their operations and needed to find a solution that was capable of handling the offset, digital, and wide-format production.

What were Hemlock’s main goals and technical requirements?

Hemlock is a highly complex operation with three core divisions: offset, digital, and wide format (display). They have many different system integrations and a large team of salespeople, accountants, estimators, coordinators, shop floor operators, IT/developers, and managers. While their overall goal was to increase throughput (i.e., more jobs, faster estimates, efficient production), Hemlock recognized the need for a robust system that could bring their departments together in one system and be configured to fit their unique technical requirements.

One of the smartest things Hemlock did in the beginning—that I would recommend to any other printer in this situation—is invest in an independent consultant to identify their goals and software requirements. They were able to work with each department individually to evaluate their must-have features and technical requirements and basically create a shopping list before embarking on the software selection journey. This helped align their business processes and get everybody in the organization on the same page.

Some of their top priorities included:

Why did Hemlock choose PrintVis?

To accommodate their extensive requirements and workflows, Hemlock needed a centralized ERP system that was highly configurable to meet their requirements. In their old system, they used different customized modules that were not fully compatible with each other. Their estimating calculations did not work well for digital sheetfed and wide format production. With business process management software, they would be able to streamline the operations and consolidate the data for more accurate reporting.

Like many other established printers, Hemlock has its own way of handling core areas of the business, and the flexibility they required is exactly what PrintVis provided. The PrintVis team was also very receptive to customizations and finding solutions to Hemlock’s problems. We worked hand in hand throughout the entire project.

Download
The Ultimate PrintVis Guide: An Overview of Functionality, Pricing, and Licensing

What was your involvement in the PrintVis implementation at Hemlock?

I was brought into the project after Hemlock selected PrintVis. Although I wasn’t part of the decision, I was responsible for figuring it all out as the ERP Implementation Lead. I have an extensive background in offset and digital print production and previous experience working with MIS/ERP implementation, development, training, and support. It was a huge implementation project, and Hemlock needed someone to manage it from start to finish.

Post-implementation, my role changed to ERP Administrator and focused on user training and PrintVis solution optimization and maintenance.

How long did the PrintVis implementation take?

Due to the size of the business and complexity of their business requirements and workflows, Hemlock’s PrintVis implementation ended up taking 12 months. We had to learn the system, map out business processes, configure and optimize the system to fit each department, troubleshoot, and train every employee. The setup itself took half a year.

To ensure implementation success and minimize business disruption, we took a “soft go-live” approach and introduced the three divisions one at a time. That way, we were able to master one part of the system with one group of employees before turning on the next.

What were some of Hemlock’s biggest challenges during implementation?

A major element of the implementation was training and change management. A lot of older print companies have been doing things a certain way for a very long time, and not everyone wanted to learn a new system. As this was a significant change to the way they do business, training was continuous before and after go-live. To prepare each user, we worked with the PrintVis team to conduct training and set up an online library full of useful documentation and resources. We also offered step-by-step trainers and set up different group training sessions for purchasers, warehouse operators, etc.

In your opinion, how has PrintVis had the biggest impact at Hemlock so far?

Since we flipped the switch in December 2018, Hemlock has seen significant improvements across the board. Although I can’t provide specific numbers, I can tell you about my experience working with each of the departments post-implementation. The sales team, for example, now has instant visibility into their contacts, customers, vendors, and production cases. PrintVis’ “Quick Quote” functionality lets the sales team do their own estimates for simpler jobs, allowing the estimators to concentrate on more complex projects.

Coordinators now have one unified system to manage the entire case workflow, which has obviously improved their visibility and productivity. Workers on the shop floor are able to see what jobs they are running and have been able to ramp up production with an integrated scheduling tool we implemented. And finally, the management team—who provided clear support and understanding from the very beginning—has been able to take advantage of real-time reporting and analysis. With deeper insight into their numbers, they have been able to make a lot of adjustments to the business.

Any Questions? Ask a PrintVis Expert!

Although Tim continues consulting at Hemlock, he works as the Senior Print Consultant at Wye Print. In his role, he is responsible for guiding our customers through their PrintVis implementation and deployment. He has been working with PrintVis since he began his journey with Hemlock and is available to answer any questions you have about PrintVis, the ERP implementation process, or your current systems.